the expansion of renewable energy and introduce

Tokyo, Japan, April 6, 2022 – Japan Climate Leaders’ Partnership (JCLP), a coalition of 206 companies committed to climate action, held a dialogue with the Prime Minister Kishida and submitted the “Statement: Overcoming the Climate Crisis through the New Capitalism”. 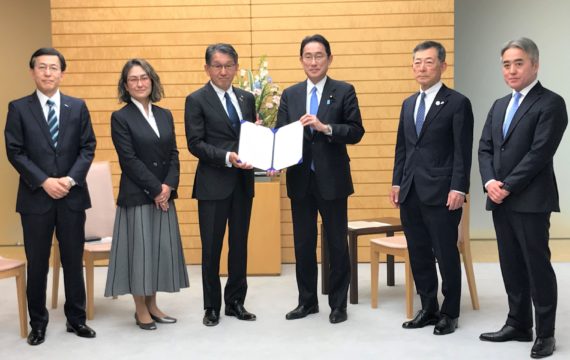 The New Capitalism is the Prime Minister Kishida’s vision to achieve a capitalism that will create a virtuous cycle of economic growth and distribution. The development of its ‘Grand Design’, a blueprint for achieving the vision, is currently underway.

JCLP, in the statement, warns that climate change is nothing less than a ‘crisis’ that could trigger various catastrophes if left unaddressed. The Prime Minister has mentioned on various occasions that climate crisis is the biggest challenge that needs to be addressed through realization of the New Capitalism.

To this end, the coalition urged that the Grand Design should be drawn up in line with the 1.5°C target and include the following points:

1.Expansion of renewable energy holds the key to balancing economic growth and a fairer distribution of wealth. JCLP calls for a new energy system based on the ‘Renewables-first principle’. In particular,

2.The New Capitalism should incorporate a carbon pricing mechanism that will enable the market to account for and reduce negative externalities. More specifically,

Prime Minister Kishida gave the coalition his strong words of encouragement, saying, “The statement is duly received and I hope that JCLP will continue to cooperate with the government in public engagement and other areas of action.”